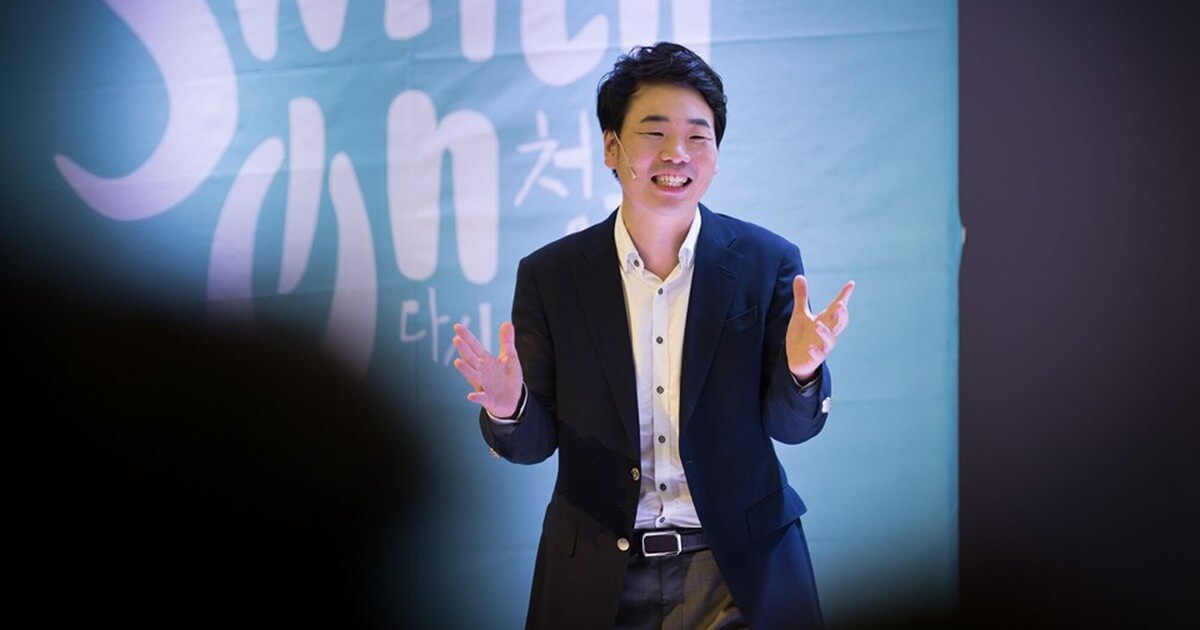 Please, tell us about yourself

My name is Paul Choi, I’m the founder of the South Korean consulting and training company Paul&Mark. In international contexts, I use the name Paul because my Korean first name, Jaewoong, is hard for many to remember.

When I started the business, I was 28 years old, which didn’t make the beginning easy. Traditionally, a serious consultant in Korea must be a man in a suit and old enough, at least 40-50 years old.

By working hard and doing things in an unusual way, I began to achieve fame and success in Korea. I rarely use PowerPoint and also try to make my lectures entertaining and interesting.

The turning point in my career came in 2009 when I got in touch with Samsung, Korea’s largest company. They asked me to help increase creativity. I was really excited, because traditionally in Korea the focus is more on productivity than creativity. The Out of the box from Samsung program was born.

At that time, all employees at Samsung wore a suit at work. I urged them to take their ties off, be creative, bounce and run if they feel like it. We trained more than 6,000 Samsung people a year.

The project was a great success and allowed me to join the popular TV talk show Sebasi talk as well as write my book Power of delivery.

In addition to Samsung, I have been honored to help several notable organizations, such as the Presidential Palace of Korea, Audi, LG and Hyundai. However, I don’t consider myself a business leader but an educator.

My real passion and vocation is to help people in developing countries. A few years ago, I was contacted from Ecuador. My calendar was full far into the future at the time, but I canceled everything and jumped on the plane because I knew I was getting a unique opportunity.

In the Amazon region, I was able to train fourteen tribes. I particularly remember one very poor grandfather. He really asked me a lot of things, and I was wondering in my mind why would that be. I later heard that he was the third highest minister in the Ecuadorian government.

In addition to Ecuador, I have been able to help, for example, in Vietnam, Moldova, Ecuador and North Korea, which has a strong connection to South Korea.

What made you excited about SmoothTeam?

Our Swedish partner LOVAK mentioned to me that they had introduced in Sweden an interesting team development service developed in Finland, and invited us to get acquainted with it as well. Although I am excited about everything new and innovative, my expectations were not high. Few new services have made an impact on me.

After participating in the SmoothTeam simulation, my first word was: WOW! I was really impressed. The simulation created an awesome flow, its structure was really well thought out, and it genuinely helps teams and organizations perform better. Simulations that take advantage of stories are an ingenious idea. In short, I love it!

We want to help as many organizations around the world as possible to benefit from the simulations. COVID-19 has put a huge burden on people and finally a service is available that can also help remote teams perform much better. I see SmoothTeam as a breakthrough in a new work culture.

What kind of impacts have you seen arise from the simulation?

At the beginning, we made extensive use of the simulations internally. Already in the first simulation, our strategy team found that the strengths of one team member had not been identified. Based on the simulation, he was given a whole new role and it made a big difference to the company. This is an amazing achievement for a two-hour simulation.

We have utilized simulations with several small and medium-sized companies. Our experiences have been really encouraging. A group of teachers from one of our clients even started crying during the simulation after noticing how badly they knew each other. It was really touching, and they talked a lot about what annoyed them and what they liked. So simulation is also an excellent tool for opening hearts.

Demand has been strong, and in the coming weeks we will be able to take advantage of simulations with several Korean giants. Customers have indicated that they are looking forward to the simulation.

How does Korean culture differ from Nordic culture?

Korean companies typically have strong hierarchies and strong leaders. European-style facilitating leaders are few and far between. The subordinate cannot give feedback to the manager or make suggestions for improvement.

American culture is an extreme example of a task-based approach. Trust is built on joint projects and relationships are easily created and abandoned as needed.

When I was in Tennessee, I found American practices very strange. They immediately started talking about dollars and percentages – well, I didn’t panic!

In Korea, trust and relationships develop slowly over time with joint dinners and other meetings. Money is only talked about when a functioning relationship exists.

Trust is also created by chaining – I can trust people that are trusted by people I know well.

In Korea, feedback is traditionally given privately and diplomatically, rounding corners.

I have sometimes tried to give feedback in my company in a straightforward Finnish style – everyone got nervous and thought I hated them!

I once read the American Superman cartoon and I thought it was like a novel – all the speech bubbles were full of text. There is really little talk in Korean comics and the focus is on the expressions, the details and the mood. Also more generally, in Korea it is customary to “read between the lines” – for example, after a speech, one typically does not discuss the content of the speech, but considers what was behind the speech and what the speaker was thinking.

Finns typically say what they think and mean what they say. I greatly appreciate this approach, but working with more traditional Koreans requires a more subtle approach.

What could Koreans learn from the Scandinavians?

The Korean War in the early 1950s killed more than three million people, destroyed our large cities and caused a huge famine. Parents were unable to feed their children and many babies had to be given for adoption to other countries, or even sold. The scars of war are still strongly reflected in our culture – men work hard to provide a better life for their children.

As a child, I really rarely saw my father because he was always at work. Twelve years ago, he proudly came to tell me that he had washed the dishes for the first time to help our mother.

Koreans are jealous of Nordic balance and equality. In the Nordic countries, everyone is equal even if they are of different ages or genders. In Korea, one must always obey one’s parents and a wife must obey her husband, even if the man is wrong.

In Korea, it has long been the mother’s job to take care of the children and the father’s job to go to work. However, we are already recognizing the alternative, although it is still rare. We even have a word for the Nordic father: scandidaddy!

In general, work has long been considered more valued than family life. In the past, work was even an acceptable reason to skip family celebrations, for example, but fortunately this is changing. Fortunately, younger Koreans also know how to value free time and do not act so hierarchically.

And what could the Scandinavians learn from the Koreans?

We Koreans are very practical, fast, smart and hardworking. I hope that the Nordics will learn to move towards their goals with the same passion as the Koreans. When we get excited about something, we push the gas to the bottom. A determined attitude has helped Koreans build, for example, several of the world’s largest companies and a strong economy.

We also know how to be very focused and flexible. However, we are not as kind as one might think at first glance. Korea is about 5,000 years old and our country has been attacked more than 900 times. This has also taught us hardness and caution.