Visma Solutions Oy is a software company with about 300 employees. Experienced coaches participated in the simulation. That’s why we chose the Biases in our Thinking simulation as this group needed challenges for their thoughts and because as they were all coaches, the other topics were already more familiar to them. We chose SmoothTeam after hearing about good experiences and, above all, because of the theme that is interesting and topical for us. We did not know of any other functioning tools for dealing with the biases in our thinking.

We strongly believe in self-direction

We are making a big change in our internal organization. Our goal is to form an even more agile company by moving towards an organization with no supervisors. To make this a success, we wanted to open up a discussion about what kind of biases in thinking could prevent us from seeing another’s person’s truth. At the same time, we wanted to get more perspective on thinking that is based on premises that are not ours, so they are more unfamiliar to us.

We strongly believe in self-direction: the management gives the direction and the people at Visma know how to make smart decisions. Against this background, it is important to try to understand the other persons’ motives and what kind of prejudices or attitudes may be behind them.

Often when you have a team day or the like, it is easy to end up in a lengthy general discussion without structure or goals. Free discussion is always valuable, but the simulation provided a clear framework for discussion and guided in a good way to discuss the chosen topic.

The simulation led to deep discussions

Some of the participants have been with Visma for more than a dozen years, but there were also newcomers present. The goal was also to get to know each other. Cognitive biases are a demanding topic, and before the simulation we talked about the topic for just over half an hour. Some of us had more experience regarding biases and we also shared stories on the subject.

Understanding cognitive biases is important in the work community and addressing them is also a topic of interest to participants. Understanding the biases will support future cooperation, and the fact that everyone opens up their own thinking is more central than the outcome of this debate. The discussions were deep and interesting. It’s hard to imagine how else in informal discussions one would start talking about these themes, at least self-critically.

Especially for the leaders it is important that we understand each other’s thinking, even if we don’t always agree. That is why we want to build a confidential environment where we can talk freely. Understanding the basic motives of colleagues helps in the development of this.

We dismantled stereotypes, learned about each other and saw blind spots

The simulation dismantled stereotypes. We easily think, for example, that salespeople are only interested in certain types of things. However, we have parallel goals that create value for the customer in sales, product development or human resources and everyone would need to understand them and work towards the common goal. Self-direction does not mean abandoning, but going together in the right, agreed direction. Dismantling stereotypes helps in outlining this direction together.

During the simulation, there were several surprises when someone had self-assessed something to be a weak factor, and others saw it as their strength. An example could be a situation where someone said they were working with some of their prejudices – and this same thing had been seen by the others as a strength. This opened up good discussions where we learned about both ourselves and each other.

As another example, we found that there are things I imagined were better than they actually are. An example of this is the information acquisition bias, which, at least at first, I did not identify as a significant factor in our case. However, the joint assessment revealed the background in more detail. The vast majority feel that, although a decision has in principle already been made, we still want to gather things in support of it, even if it does not change the decision itself. This is an example of a blind spot that we all have and that the simulation helps to illuminate.

In addition, the simulation also introduced people to each other quite concretely. We had a number of individuals who had never met physically. Now we got into good discussions, and the implementation of the simulation via video conferencing didn’t affect this negatively at all.

I recommend SmoothTeam to teams where collaboration, motivation and enthusiasm are important

We are a software company, where we are quite open and the simulations fit us really well. SmoothTeam simulations work particularly well in, for instance, expert companies where people’s expertise is at the center and where people work together. In such cases the most important thing is that the team is motivated and enthusiastic about their job. 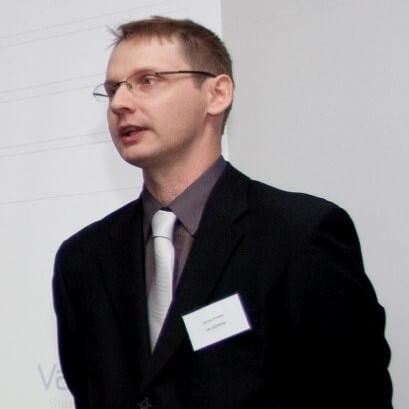